Every November and December, Christmas markets pop up all across western, central, and eastern Europe. They’re some of the main tourist attractions during the Christmas season, with each city offering variations on local specialities, seasonal dishes, ornaments, and handicrafts. So of course, as I was backpacking around the region, I managed to catch quite a few!

My Christmas market journey began in Warsaw, Poland. As it was still early, though, there wasn’t much yet happening. I did get to sample the holiday snack Oscypek, a savory grilled smoked sheep’s cheese with a sweet berry compote:

Next was in Krakow, Poland, right as it was opening. The biggest market is held in the main square, underneath the exquisite Wieża Kościoła Mariackiego cathedral. Unfortunately, as I was leaving the country on the day it opened, there wasn’t much to see:

My next stop was two nights in Košice, Slovakia. Although the Christmas market there wasn’t yet open, I did see a free concert of a famous Slovakian singer Dominika Mirgova, and it included some seasonal festivities:

After Slovakia was Vienna, famous for one of the best Christmas markets in Europe!

The city loves Christmas, with smaller markets and decorations throughout, and the stunning architecture only adds to the ambience:

After Vienna came Salzburg, where I saw the exciting Krampuslauf (which you can read about here!). And with Krampuslauf came more Christmas fun! 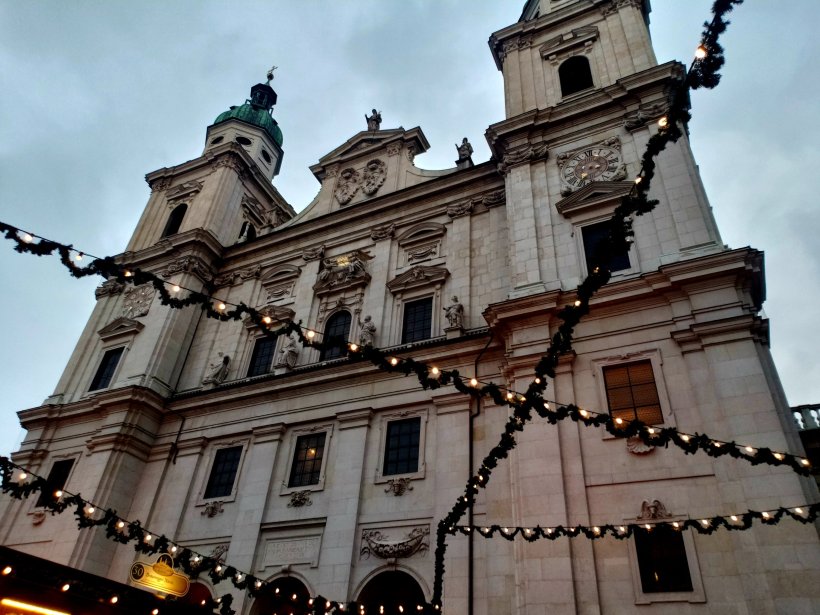 Next stop was the Czech Republic. First, the small but picturesque Český Krumlov….

…. Followed by Prague. Beautiful, but crawling with tourists.

After Prague, a short stopover in Dresden! German Christmas markets have won awards:

Aga, there were multiple decorations and markets in various locations:

My final stop was Berlin. Per the norm, there were multiple markets around the city. Arguably the most popular is the Gendarmenmarkt, and it required an entrance fee for admission! That didn’t stop people from queueing up, though:

Due to the entrance fee and feeling sick of Christmas markets by that point, I did not enter. I did enjoy the decorations at the Brandenburg Gate, though…

… As well as the infamous (and now-defunct) Checkpoint Charlie:

If you’re interested in seeing Christmas markets in Europe, you are not lacking in choices. France is also supposed to have many beautiful ones, and (surprisingly) Zagreb has been voted #1 in Europe by the travel site European Best Destinations! Until next year, happy holidays!

2 thoughts on “Christmas is (was) in the Air”