One of my favorite things about Malawi is the Gule Wamkulu. This secret society is a UNESCO Cultural Heritage originating from the Chewa tribe. They are the spirits of the ancestors, returned from the afterlife to run amok and perform at special events. The identities of the members is kept a tight secret to non-members/non-believers, and it’s all very hush-hush. In fact, the village where we did our training was one of the main areas of the cult, and one day during a tour of the surroundings, I asked an elderly man what was inside a round hut, knowing full well that it contained items for the Gule. He paused and said, “Uhh…. It’s traditional instruments…. But I’m not allowed to talk about it.” Here is a picture of some Gule as they came near to my host family’s compound:

Usually as they run around, they carry thin branches and ask people for money. If you refuse, they hit you with the branch. Women and children are terrified of them, so typically run away. If they come to your house, you should give them a small gift of eggs or soya pieces or another food item. “Gule Wamkulu” literally translates to “Big Dance.” To this end, they also perform dances during special events, such as important football (soccer) matches… Or the Swearing In ceremony for Peace Corps Volunteers!

Speaking of which, on Friday August 16, the US ambassador to Malawi came to our training village, along with Malawi government officials, Peace Corps staff and family, and all of our soon-to-be counterparts we’d be working with for the next two years. Everyone wore their Sunday best, and the ceremony itself lasted a few hours, filled with speeches, pictures, and dancing by the local women and men… And Gule Wamkulu!

(Note: most photos of Swear-In Day are courtesy of Peace Corps Malawi.)

Me with my host family. As a parting gift, I had matching chitenje outfits made for us all: 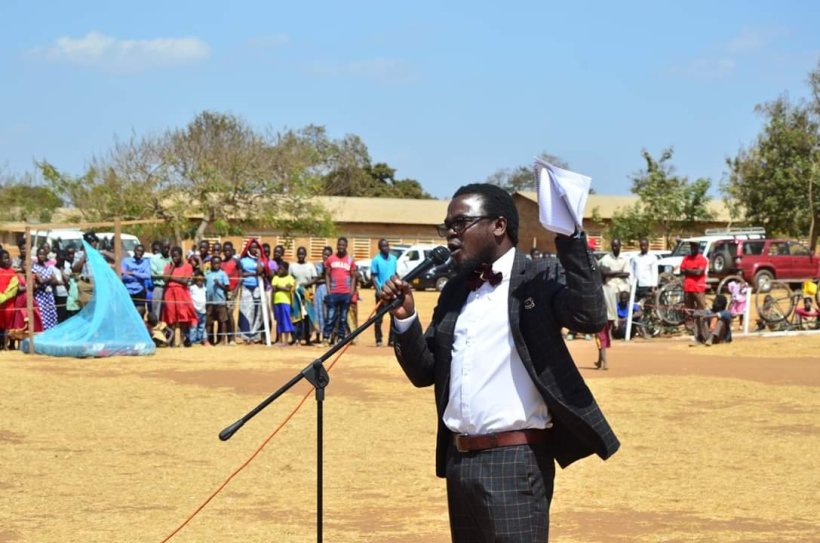 We also sang the American AND Malawian national anthems! (Shown above) 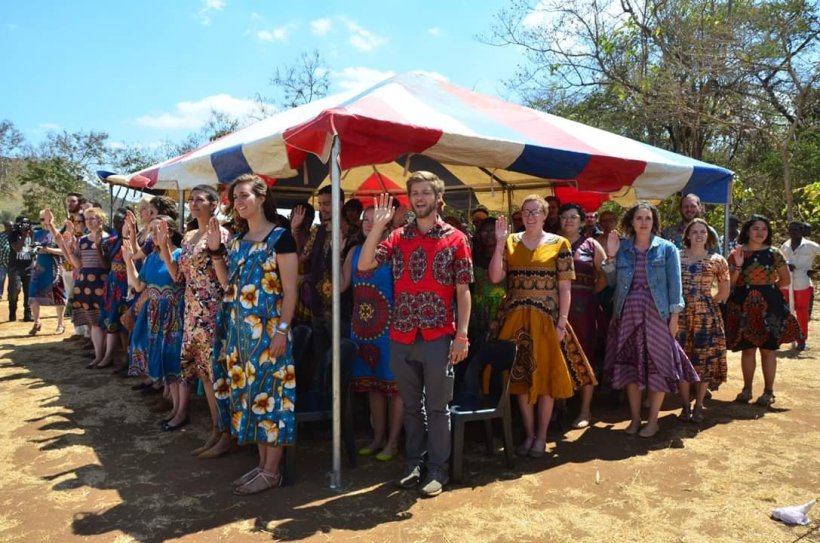 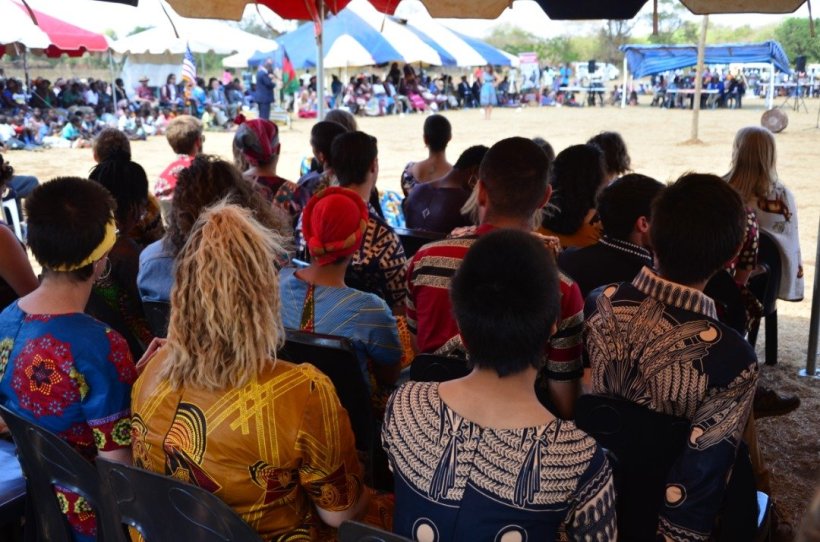 Each of us went to shake the hands of the government officials, both USA and Malawian: 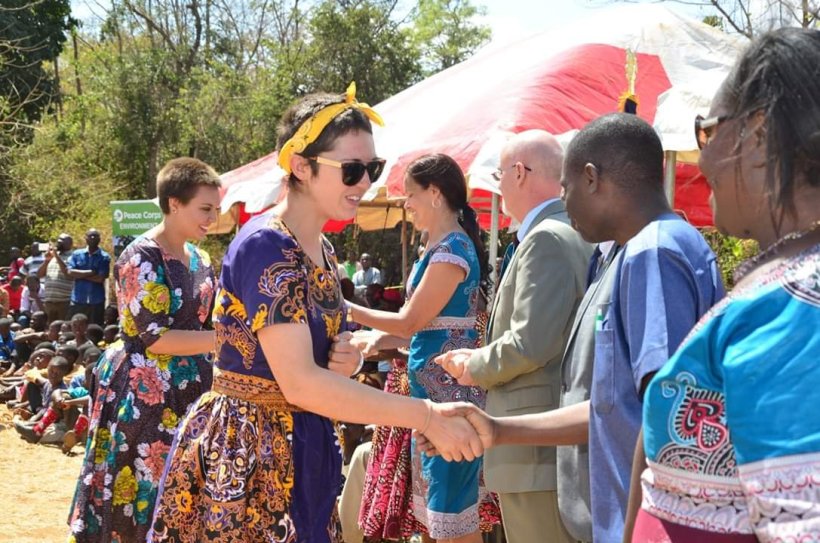 There were many hugs all around: 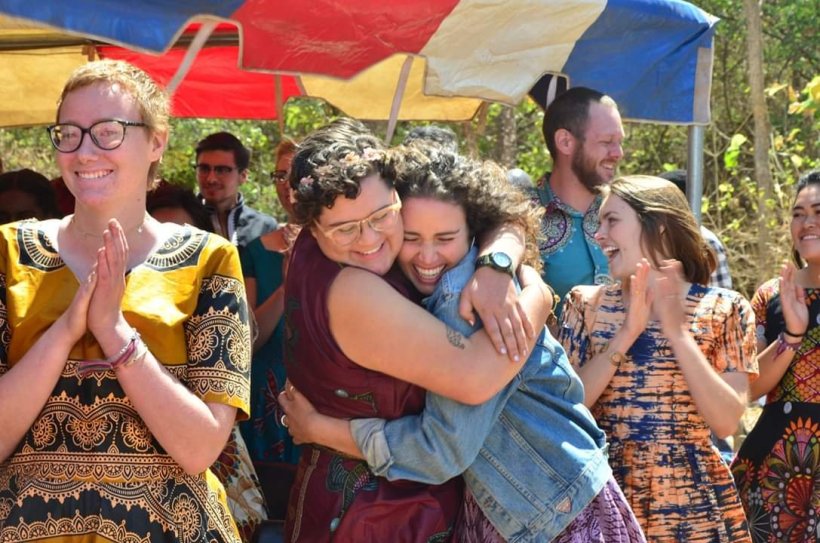 We were given a pin to wear on our lapel!

One of the most beautiful moments was when one several of our Volunteers gave a thank-you speech to the villagers in the local languages that we learned (Chichewa, Chitonga, Chitumbuka) and in English… And then, without giving Peace Corps advanced warning, saying “Thank you” in the many mother languages of our newly-minted Volunteers, to showcase the diversity of America. It gave our Country Director a small heart attack that we went off-script, but it was so well-received in the end.

When the Gule Wamkulu perform, they often adopt the costume of an animal, to represent a very powerful or unique individual. The Gule climbing this pole is a squirrel!

Celebration time with a feast and cake:

The day after our Swear-In ceremony, we all climbed into various buses and headed off to our permanent sites scattered around the country, where we’ll spend the next two years! Of course, the bus I was on broke down a mere 30 minutes down the road, and I got out to push it a while before my counterpart’s friend came with a car to drive us. Fortunately, my site is about an hour away from the capital Lilongwe, so we didn’t have far to go unti we arrived at my new home. I share one half of a duplex (with another coworker, a nurse, in the other half):

The picture directly above is my kitchen in the middle (which I don’t actually use as I prefer to cook inside the house itself), with a storage room and bathing room on the left, and chimbudzi (toilet) on the far right. I have my own private tap in my backyard! No more pumping water and carrying it from the borehole!

As a Community Health Specialist Volunteer, I’m based out of a rural health center. We provide various services, including maternal and antenatal care, lab testing, vaccinations, pediatrics (focusing on malnourished/underweight children under 5), general outpatient services, and HIV treatment and support.

This is our ART (Anti-retroviral therapy) aka HIV clinic. One room is dedicated for testing, one for data/records, one for check-in, and one for patient counseling. Usually in Malawi, health centers designate one day per week for the ART clients to come for bloodwork and counseling, as well as receive medication. Our day is Thursday; I took this picture on a Saturday, hence no patients at the moment:

One big concern at my health center is the lack of patient confidentiality for the ART clients. Our center is easily visible from the road, so anyone passing by can glance over and see who is here waiting for ART services. In Malawi, that’s a big problem because people living with HIV are discriminated against, despite Malawi having one of the highest rates of HIV in the world. I hope to find funds so we can build a fence around the ART clinic during my time here.

My first few months at site is spent focusing on community integration. To that end, I’ve been spending most days at my health center, interacting with patients or supporting staff in records-keeping or other tasks. I don’t provide any direct care, although I do spend a lot of time weighing babies. The mothers come and wrap the child in a chitenje (colorfully-printed fabric) and hang them from the scale attached to a wooden beam, and I record the information in their health passport. You can see the beam standing on two poles in front of our environment building (it’s called “environment” because it’s the department in charge of outreach services to the community):

When I first arrived at my site, I didn’t have electricity. I cooked my meals on a stove using methylated spirits…:

Fortunately, my coworkers all had electricity, so two weeks after I arrived, my side of the duplex was wired for it as well! So now I use a hot plate… Unless we’re having a blackout, which happens at least once every day.

Coming soon: more scenes of my community, the busy market day, a football game, and traveling to Lilongwe via public minibus (with a live chicken)!